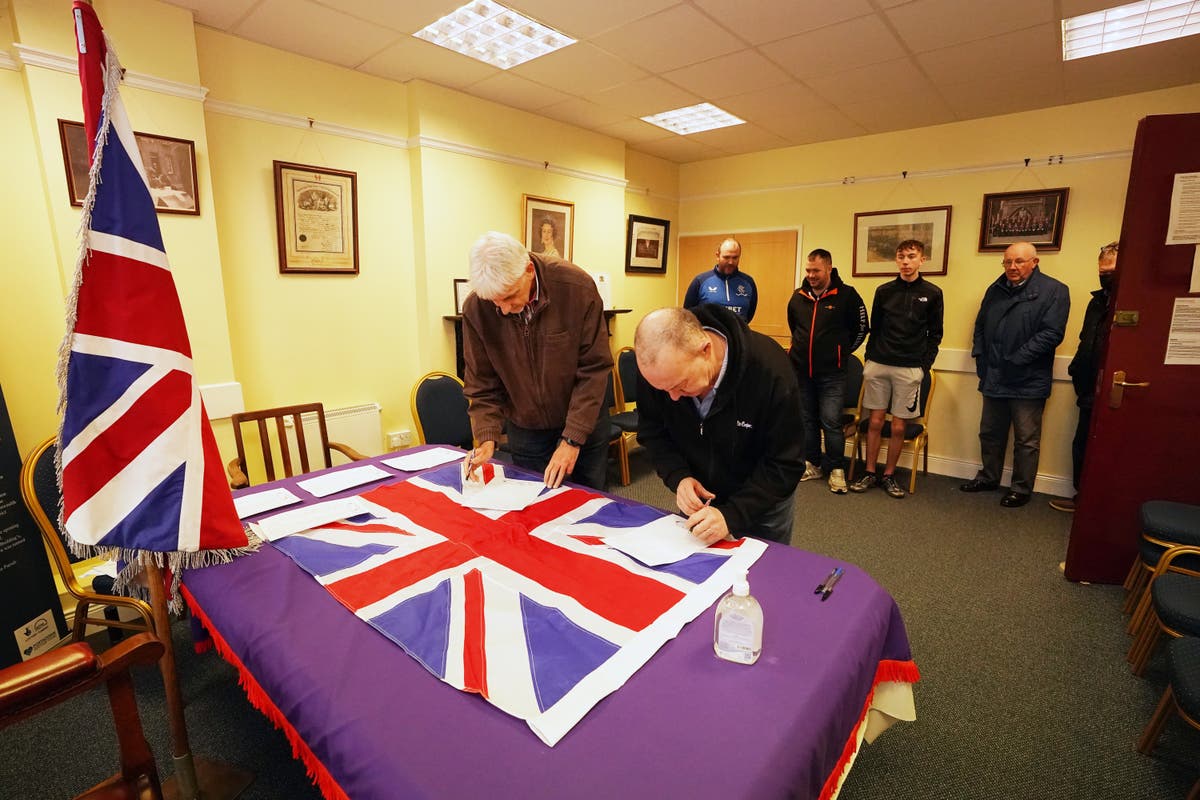 A statement has been signed in hundreds of places across Northern Ireland urging Boris Johnson to listen to trade unionists’ opposition to the Brexit protocol.

There is anger among trade unionists and loyalists against post-Brexit trade deals which see the region being treated differently from the rest of the UK to avoid placing a hard border in Ireland.

The declaration, organized by the Orange Order, was signed on tables covered with Union flags in around 250 Orange Halls across Northern Ireland.

The initiative had echoes of the signing of the Ulster Pact in 1912 against autonomy in Ireland. This was signed by nearly 500,000, some of whom are believed to have been of their own blood.

Harold Henning, Deputy Grand Master of the Orange Order, said the statement supported the anti-protocol stance taken by leaders of the Unionist parties.

He said there was a strong sentiment against Northern Ireland being treated differently from the rest of the UK, and the impact this is having on business.

Mr Henning, who visited several of the rooms where the statement was signed, said people were frustrated.

It was also possible to sign the declaration online.

Mr Henning said they would not know the total number of signatures until they are collected next week, but said he assumed tens of thousands had already signed it.

“When all the elected trade unionists are against the protocol, why is the message not getting across? He told the PA news agency.

“People come out to sign and say, ‘Wait, listen to us’.

“At this point, we leave it to our politicians to try to fix this problem, and I hope they can do it, and I hope our Prime Minister is listening, and I hope Europe is listening. , because so far they have not listened. “

Mr Henning said the statement would be presented to Mr Johnson in Downing Street.

Earlier this year, protests against the protocol staged on social media were followed by riots, but Henning described the statement as a “peaceful way to express frustrations.”

He added that other measures could be taken if deemed necessary.

“There will be more, it’s a game for now and we’ll see what progresses, but hopefully they’ll listen,” he said.

“I don’t think there will be another statement but there will be moves in other directions to keep up the pressure and get the message across to Dublin, to Europe, and to our Prime Minister, who has to listen to the people Unionist from Northern Ireland.

“It may be more gatherings, gatherings, it’s in the future. Right now, it’s up to politicians to do their best to fix the problem. “

DUP MP Carla Lockhart was among those who signed the declaration at Carleton Street Orange Hall on Saturday.

She said it was great to see a “constant flow of people” joining us.

“It shows the strength of the feeling that there is on the ground among the Unionist people against the protocol, the damage it is doing economically and constitutionally to Northern Ireland,” she said.

Discussions continue between the UK and the EU on the protocol under which Northern Ireland effectively remains in the single market for goods.

This avoids a hard border with Ireland but increases controls and trade barriers on goods crossing the Irish Sea from Great Britain, making it a source of tension in Unionist communities.

The DUP urged the government to trigger Article 16 of the protocol, which would suspend parts of the deal and risk a major escalation of tensions with the EU

“The protocol must go.”