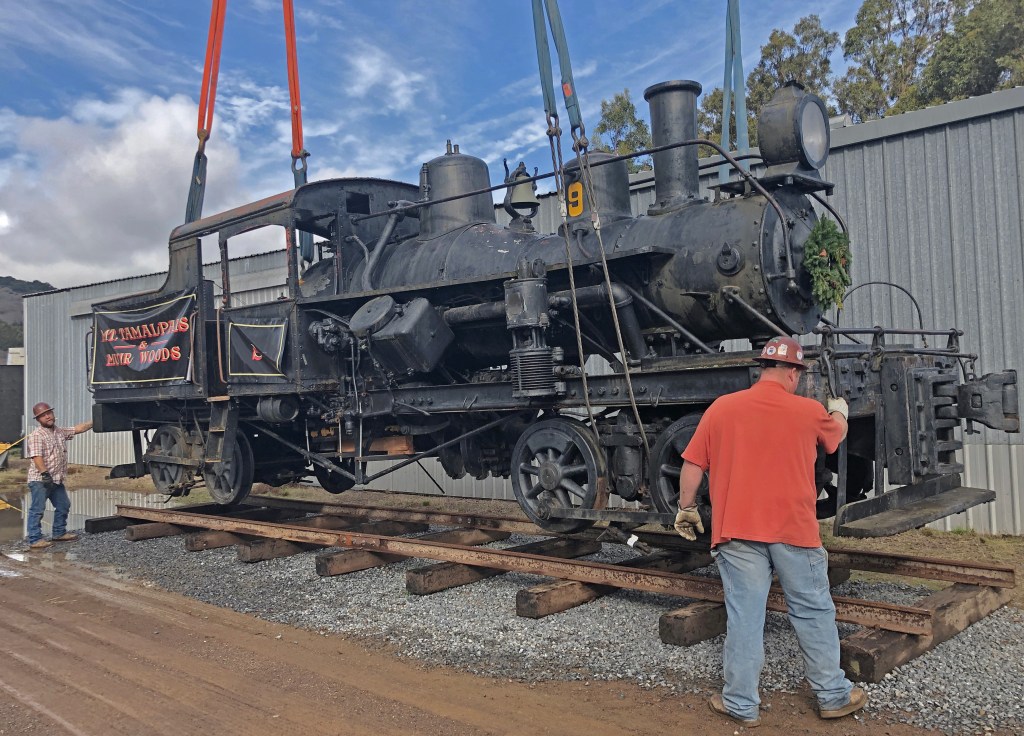 Work and play is underway to build a full-scale, 1,200-pound wooden model of a steam engine that once ran through Mill Valley.

With artistic help from child volunteers, the Friends of No. 9 – a non-profit organization named after the Pacific Lumber Co. No. 9 locomotive – assemble a model train engine to display in the city center. from the city. It will be 30 feet long, 9 feet wide, and 11 feet high.

Work is underway at Mill Valley Lumber Yard, a site with a railroad history that has been remodeled with retail stores.

The project, which is supported by the Mill Valley Historical Society, aims to generate buzz – and funds – to complete the refurbishment of the actual No.9 locomotive. The hope is to exhibit the 36-ton steam engine somewhere. is going to town, said Fred Runner, president and executive director of Friends of No. 9.

“It’s hard for people to imagine a 30 foot long steam engine,” Runner said. “Part of the idea is to build a life-size representation to make that understanding a little easier – to give an idea of ​​what # 9 might look like in a permanent display.”

The nonprofit will apply this week to the Parks and Recreation Commission for permission to place the model for a temporary display at the east end of Depot Plaza in time for a celebration scheduled for October 10 at noon.

The steam locomotives of the Mount Tamalpais and Muir Woods Railway roared through Mill Valley from about 1896 to 1930. The railway, which consisted of about 8.2 miles of winding track, was billed as “the railway. the most tortuous in the world ”.

The real No.9 engine was built at Heisler Locomotive Works in Erie, Pa., In 1921. It was shipped to Mill Valley soon after, where it was used on the Mount Tamalpais Scenic Railroad until 1924.

After being sold and moved, the train was finally exhibited at the Scotia Museum in Humboldt County in 1953.

Despite years of efforts to bring the train back to Mill Valley, Runner and his history and railroad-loving friends only acquired the train in March 2018. That’s when the Scotia Community Services District, which owned the train, started the engine for an auction offer.

“This is the only surviving full-size piece of the Mount Tamalpais Railroad,” Runner said.

It cost about $ 30,000 for the trucks and cranes used to transport the engine to an undisclosed ranch where it is being renovated. The association spent approximately $ 12,000 to remove asbestos and lead paint. Now workers are restoring the tender, a 650-gallon fuel tank.

“It’s a really important part of our history,” Macris said. “We should highlight it in a prominent place. “

Over the past four weekends, the association has invited children to learn about the city’s railroad history and help paint the engine model.

“It’s partly an educational project and partly an artistic one,” Macris said. “It’s good for the kids.

Jan and Matt Mathews, owners of Mill Valley Lumber Yard, said they are happy the nonprofit and children are working on the project on their property.

“The tracks went up Miller (Avenue) and a spur entered the lumberyard for hauling lumber,” Jan Mathews said. “The engine is an important part of Mill Valley history and we are delighted to help promote it.”

Sean McGrew, the city’s arts and recreation director, said his department had worked with Friends of No. 9 on the model’s plans for most of the past year.

“I think every time you bring art to the community it’s a positive thing,” McGrew said of the project. “It makes us think about the possibilities and it’s always a wonderful thing.”

The Parks and Recreation Commission meeting is at 6:30 p.m. Wednesday. The agenda and staff reports are online at bit.ly/3A7Nbc6.

A permanent display of the real No.9 would require city council approval, McGrew said.

More information about the project is on friendsofno9.org.