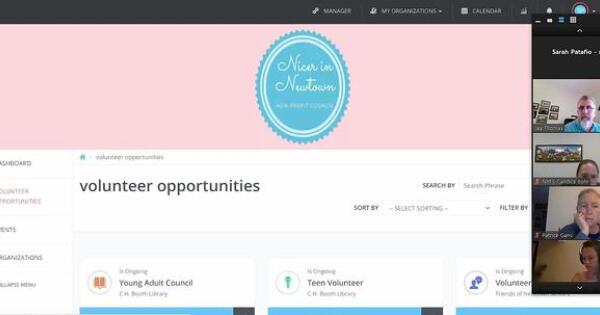 The CH Booth Library hosted the last meeting of the Newtown Nonprofit Council via Zoom on September 20. The program included the “News and Views” discussion as well as an overview of the new volunteer website called Get Connected.

With so many new people logging in for the first time, CH Booth Library Director Doug Lord began by introducing himself and explaining that the Newtown Nonprofit Council is essentially “a bunch of friends who come together and share. news and views on what’s going on. . “

He prefaced that while he does not usually come to these meetings to ask for things from the public, and is instead there to offer his support and collaboration, he would appreciate speaking to individuals / groups individually about this effort of public health awareness.

“If you have committee meetings, board meetings, internal meetings, external meetings, I would really appreciate being a part of those in a very little sense, so five to ten minutes at your command. of the day, ”Lord said.

He then opened the floor to others to share their news and views on the community.

Patrice Gans of Random Hacks of Kindness Jr was the first to speak and discuss his organization’s upcoming Hack-A-Thon virtual program called Hacking for Endangered Species on September 25. The event is open to fourth and eighth graders across the United States.

Gans said she was looking for ideas on how to get the word out and get more kids to enroll in the program. Other members of the meeting gave their advice and some even asked that she send them the information flyer so they could help.

Jay Thomas of Families United in Newtown (FUN) said they are having an event this Saturday called Pancakes & Pajamas at the Newtown Congregational Church to dance, eat and have fun. They will also be hosting an event at Castle Hill Farm on October 28 for people to come in their Halloween costumes.

“I am a huge fan of FUN,” Lord said, adding that he was always happy to spread the word.

American Legion Post 202’s Donna Monteleone Randle has let everyone know that they too are having an event this Saturday, September 25. This is their first children’s fishing tournament at Great Hollow Lake, Monroe, from 9 a.m. to noon. Entrance is free and there are prizes.

She noted, “We were very lucky and blessed to have received a donation of rods and reels for children who do not have fishing equipment… thanks to a generous donation from the Friends of Newtown Country Club.”

Katherine Simpson, Newtown Lions Club, discussed the recent approval of adaptive equipment for the Dickinson Memorial Park playground project. She said they expect to innovate this fall, but their goal is still $ 3,000 short.

With that in mind, the club are also hosting their Treasure Hunt fundraiser at Chintz-N-Prints, 39 South Main Street, also on Saturday, September 25. People can donate their loose change in a zipped bag. Additionally, at the same time and location, the Newtown Lions Club is hosting a parking lot tag sale with the proceeds going to the playground project.

“In the meantime, that’s not all we’re doing,” Simpson said.

She recapped the recent Great Pootatuck Duck Race and expressed her gratitude for everyone who came. She added that they continue to sell Mustang tickets for the car raffle for $ 10. Finally, on October 2, the community is invited to join the group to clean up Orchard Hill Park.

Candice Bohr, Newtown Youth and Family Services (NYFS), informed the Newtown Nonprofit Council that they are currently working with the Knights of Columbus to raise money for FAITH Food Pantry with a 5K run in Fairfield Hills. The NYFS website says it’s September 25.

Bohr mentioned that the NYFS is also preparing to host its 36th annual holiday festival in December and that students at Newtown High School are working on the reconstruction of its Safety Town Camp buildings.

Nicki Giordano, EverWonder Children’s Museum, spoke about the upcoming Health Show on Saturday, October 30, which will feature a variety of activities at the museum with different time slots.

In addition, the group’s annual fall fundraiser titled Science of Mixology will be held at Marygold’s on Main on Saturday, November 6 from 6 p.m. to 11 p.m.

Melissa Houston, of the Newtown Historical Society, announced that she is thrilled the group is gaining relevance to the community and will be hosting open houses from September through June. The next ones people can look forward to on October 24 and November 21.

Maureen Decker, Volunteers Open Worlds (VOW), said she is passionate about nonprofits. She started her business to create a pool of people where they can connect with businesses that need volunteers.

“I’m eager to learn more about Newtown’s nonprofits, so that when businesses are looking for opportunities, I can put them in touch with any needs that [they] may have for volunteers, ”Decker said.

Sarah Patafio of the Booth Library began by explaining that she is the program coordinator for the Newtown Nonprofit Council’s Get Connected Project.

Lord explained, “Sarah can show the organizational side and also the volunteer side to kind of give you a glimpse of the good things that are coming up in terms of your ability to establish a cohesive internet presence to recruit volunteers as well as change those things. volunteer opportunities according to your needs.

Patafio shared their screen and so far featured the Galaxy Digital Get Connected site.

There were already a few organizations that were uploaded to the website, as well as some volunteer opportunities.

“On the site, you can include a mission statement, contact details, your logo, some photos, your website and social media, and then your volunteer opportunity will be posted right on the page,” she explained.

Simpson added that it’s like a virtual volunteer fair.

The Newtown Nonprofit Council meets on the third Monday of the month at 10 a.m. The next public meeting is Monday October 18th.

For more information about the group and how to get involved, email CH Booth Library Director Doug Lord at dlord@chboothlibrary.org.

Journalist Alissa Silber can be reached at alissa@thebee.com.