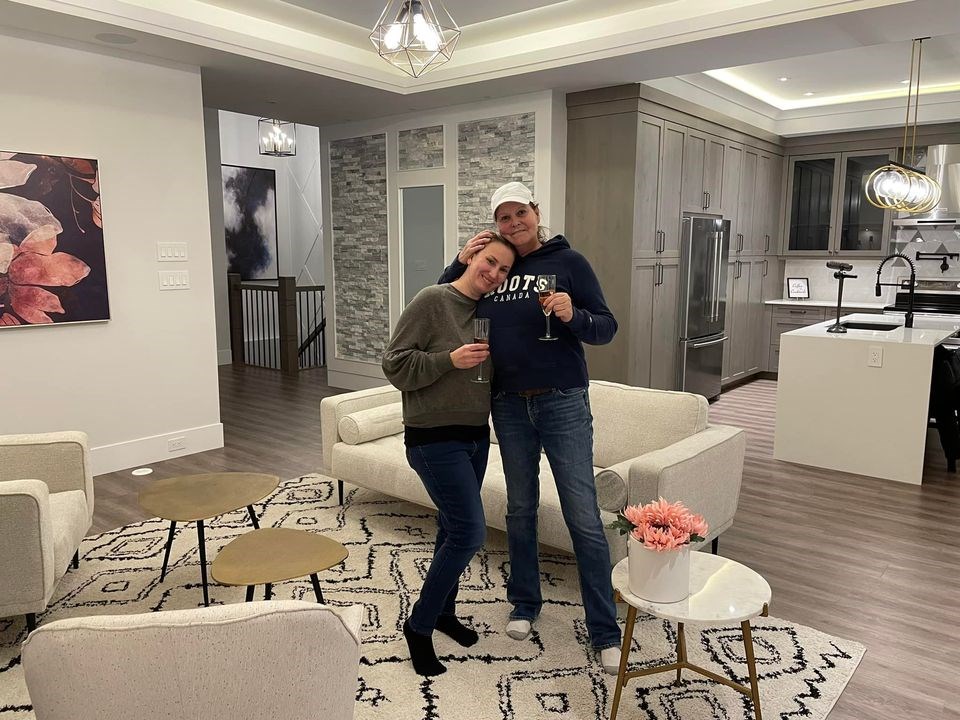 Diana Forfar and Brenda Ferch, her colleague in the City Hall Utilities Department, have been selling Prince George Hospice Dream Home Lottery tickets for about 10 years.

The way they saw it, someone won it, and if it’s not them, the money goes to a good cause.

Mayor Lyn Hall called Ferch right after the draw and at first she wasn’t sure which of the two tickets she bought for the draw was the winner. She and Forfar each buy a ticket for themselves and one with both names on it and Hall has confirmed that they are joint winners.

“It was a shock, all I remember is yelling name names and telling (Forfar) to put his butt in my house so we can come upstairs and see our new home,” Ferch said.

A colleague whose mother had watched the live broadcast of the draw on the hospice’s Facebook site broke the news to Forfar, who received the call from Ferch minutes later.

Their colleague met them at home with a bottle of champagne and three glasses and they toasted their good fortune and the party lasted until midnight.

“For at least 10 years we have been buying a ticket together for the Hospice Dream Home and the Spruce Kings Dream Home and every year we buy tickets for both,” said Forfar. “Then we spent six months dreaming about what we would do if we won the house, and that dream would be killed and we would move on to the next.

“This time the dream has come true.

They have worked together since 2005 and plan to put the house up for sale to a real estate agent as soon as possible to share their earnings.

Ferch is 61 and has said it could speed up her retirement plans, but she’s still ready for it. She said she would buy a new vehicle to replace her aging Hyundai, but beyond that she is not sure what she will do with the money. The idea of ​​winning such a big prize will make Christmas even happier for Ferch, who waits for his sons, 26 and 28, to come to Dawson Creek and Vancouver to spend time together during the holidays.

“I can decide what I want to do, I’m still too young and full of energy to give up my job,” Ferch said. “I work for the city, like Diana does, and I’ll continue to give these kids a run for their money. I can see (vacation out of town) happening after things calm down. It’s gonna take a while to sell the house so we can’t be stupid. Until then, let’s hope that the (pandemic) travel bans will be lifted.

“This is a new chapter in our life and we are looking forward to it.

Forfar says she and Ferch try to buy their tickets right after they go on sale for the first time to take advantage of early raffles. They made a tradition of visiting the house together and did so a few months ago. Forfar’s husband Jason Schumann had not seen the house until they fell on Saturday afternoon.

“We always had this deal that we would sell it, the house doesn’t make sense to any of us at our stages of life, and our plan is to bring it to market,” said Forfar, 42. “It definitely changes my life and that of my family. This money can go very quickly, but you also have to take advantage of it a little. “

Forfar and her husband have a 14-year-old daughter and she has already claimed one of the sofas on display in the basement. The 3,470 square foot home was built in the Nechako View subdivision at 4047 Brink Dr.

The Dream Home Lottery is the largest annual fundraiser for the Prince George Palliative Care Hospice Society. This one and the 50-50 draw were sold out. Elton Rallison won the 50-50 draw of $ 150,000 on Friday.

Winning the grand prize will not decrease their support for future raffles.

“Brenda said, we’re not going to stop our tradition, we’re going to continue to buy tickets every year for every house,” Forfar said. “It’s good to dream, but you support the cause more, but it just paid off for us. “